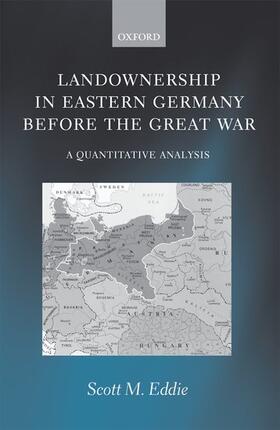 Eddie Landownership in Eastern Germany Before the Great War: A Quantitative Analysis

Eddie Landownership in Eastern Germany Before the Great War: A Quantitative Analysis

The big landlords of eastern Germany have loomed large in the country's history, but the absence of official statistics on landownership has left their position and identity confined to folklore, without satisfactory quantification.

This study, making extensive use of primary sources from the seven 'core provinces' of eastern Germany-the so-called 'East Elbian' region-establishes answers to questions pivotal to our understanding of pre-war Germany: who were the biggest landowners, both by area and by the tax assessment of their land? Which social groups held land? How much land did they own and where? How did this change, especially during the last decades before the Great War?

Professor Eddie demonstrates that most of the inroads into landownership by the bourgeoisie had already been made by the mid-1850s, perhaps even before the mid-1830s. However, one of the most interesting findings in this study is that, despite rapid industrialization after 1880, there was a net exodus of the nouveaux riches from the ranks of large land owners. On the eve of war, the largest landowners were the Prussian state, the royalty, and the higher nobility.

Meticulously researched and thoroughly documented, this book will be the benchmark for all future work in this area.

Eddie, Scott M.
Scott Eddie is Professor Emeritus of Economics at the University of Toronto.