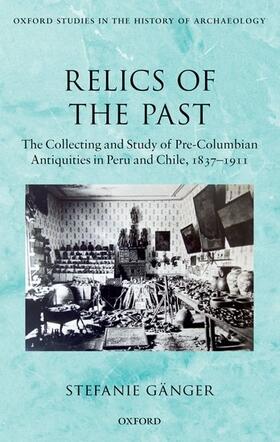 Gänger Relics of the Past: The Collecting and Studying of Pre-Columbian Antiquities in Peru and Chile, 1837-1911

Gänger Relics of the Past: The Collecting and Studying of Pre-Columbian Antiquities in Peru and Chile, 1837-1911

Relics of the Past tells the story of antiquities collecting, antiquarianism, and archaeology in Peru and Chile in the second half of the nineteenth and the early twentieth century. While the role of foreign travellers and scholars dedicated to the study of South America's pre-Columbian past is well documented, historians have largely overlooked the knowledge gathered and the collections formed among collectors of antiquities, antiquaries, and archaeologists
born or living in South America during this period.

The landed gentry, the clergy, and an urban bourgeoisie of doctors, engineers, and military officials put antiquities on display in their private mansions or bestowed them upon the public museums that were being formed by municipalities and governments in Santiago de Chile, Cuzco, or Lima. Men, and some few women, gathered antiquities on their journeys 'inland' and during sociable weekend excursions, but also on quotidian commercial voyages or in military campaigns. They bartered antiquities
with their fellow collectors or haggled about their price on the antiquities market. In their hours of leisure, they marvelled at them, wrote about them, and disputed over their meaning, age, and interest in learned societies, informal gatherings, and at meetings in universities and public museums.
This volume unveils a hitherto largely unknown world of antiquarian and archaeological collecting and learning in Peru and Chile.

List of Illustrations
Introduction: Antiquities in Peru and Chile
1: The Mascapaycha: Collections of Incan Antiquities in Cuzco
2: The Khipu: Antiquarianism and Archaeology in Lima
3: Pascual Coña: Collecting and Colonization in Araucanía
4: The Valdivia Jug: Archaeology over the War of the Pacific
Conclusion
List of Archives
List of References
General Index

Gänger, Stefanie
Dr Stefanie Gänger is a Assistant Professor at the Institute for Iberian and Latin American History at the University of Cologne.