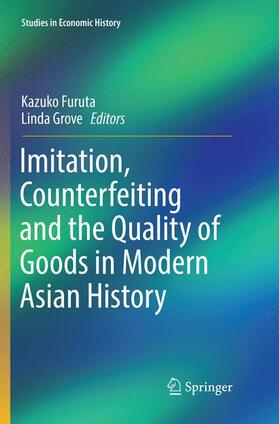 Grove / Furuta Imitation, Counterfeiting and the Quality of Goods in Modern Asian History

Grove / Furuta Imitation, Counterfeiting and the Quality of Goods in Modern Asian History

This book focuses on the production of low-quality goods, the rise of markets for imitations and shoddy goods, and dishonest trading practices which developed along with the expansion of global trade in the nineteenth and twentieth centuries in East Asia. Fake, imitation, counterfeit, and adulterated goods have long plagued domestic and international trade. While we are all familiar with contemporary attempts to control the manufacture and sales of such goods, economic historians have given the subject little attention, despite the fact that the growth of international trade and the lengthening of commodity chains played a major role in the spread of such practices. The problem is approached in several ways. Part I of the book examines the ways in which the asymmetry of product-quality information was reduced and mechanisms were developed to bring greater order in the markets, using case studies on cotton fiber, silk pongee, cotton cloth, fertilizer, and tea. Part II of the book focuses on problems associated with imported everyday-use items—which are referred to here as “small things”—and the role played by imitations of such everyday goods as soap, matches, glass bottles, and toys in the development of the modern economies of Japan, China and Taiwan. The project brings together the work of an international team of scholars who offer important historical perspectives on these issues, exploring the ways in which new institutions were created that continue to play a role in contemporary global economic activities.