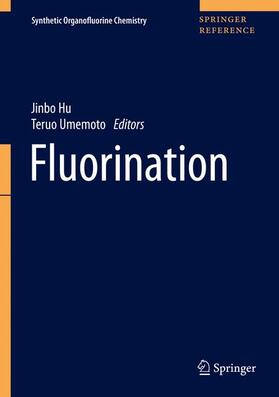 This volume reviews the recent advances in formation of C-F bonds and X-F bonds (X = heteroatom) to produce useful fluorinated molecules for pharmaceuticals, materials and more. Reactions and methods associated with fluorination, including monofluorination, difluorination, trifluorination and other polyfluorination that have emerged within the past few years are systematically discussed. With contributions from front-line researchers in this field from both academia and industry, this book provides a valuable resource for scholars, graduate students as well as professionals.

Jinbo Hu was born in Zhejiang, China in 1973. After he completed his B.S. (Hangzhou University) and M.S. (Chinese Academy of Sciences) degrees, he did his Ph.D. work during 1997 to 2002 at the University of Southern California with Professors G. K. S. Prakash and G. A. Olah. After his postdoctoral work at USC, he joined the faculty at the Shanghai Institute of Organic Chemistry, Chinese Academy of Sciences (SIOC, CAS) in early 2005, where he is currently the Deputy Director of SIOC and the Head of the CAS Key Laboratory of Organofluorine Chemistry. He was the recipient of RSC Fluorine Prize 2009, Tan Kah-Kee Young Scientists' Award 2012, Novartis Lectureship 2015, and IOCF Lectureship 2019. His current research interests include synthetic fluorine chemistry and fluorinated materials.

Teruo Umemoto was born in 1949 in Japan. He learned chemistry in Okayama University and then, organic chemistry in Graduate School of Osaka University. In 1976, he received Doctor's degree of Science from Osaka University and joined the Sagami Chemical Research Center where he started his fluorine chemistry in 1978, and he rose to the position of Chief Researcher in 1988 there. In 1990, he moved to Daikin Industries Ltd. and continued to advance his fluorine chemistry as Manager of Basic Research Chemistry Department of Daikin. In 1998, he left Daikin and emigrated to U.S.A. where he started IM&T Research Inc. as a subsidiary of a Japanese company in Denver, Col. in 1999. He led the IM&T as President and Chief Researcher until 2011 when he successfully oversaw a takeover by UBE America Inc. After leaving UBE, he spent a period as Visiting Professor at Shanghai Institute of Organic Chemistry in China in 2013. By the Thousand Talents Plan of the Central Government of China, he continued his fluorine research as Senior Research Fellow in Zhejiang Jiuzhou Pharmaceutical Co. Ltd. in China in 2014 to 2019. Currently he is conducting the fluorine research in University of Louisville in U.S.A. as Senior Research Associate. In 1983, he received the Progress Award of Chemical Society of Japan for young active chemists for creative works, and in 2014, the American Chemical Society Award for Creative Work in Fluorine Chemistry. In 2017, he was given the title "Lifetime Professor of Honor" by Jiangxi Normal University in China.