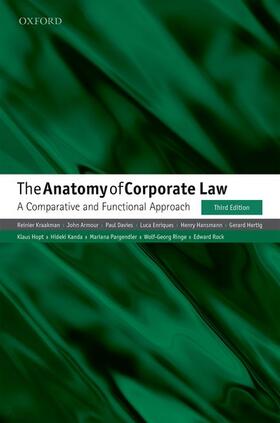 A Comparative and Functional Approach

This is the long-awaited third edition of this highly regarded comparative overview of corporate law. This edition has been comprehensively revised and updated to reflect the profound changes in corporate law and governance practices that have taken place since the previous edition. These include numerous regulatory changes following the financial crisis of 2007-09 and the changing landscape of governance, especially in the US, with the ever more central role of
institutional investors as (active) owners of corporations. The geographic scope of the coverage has been broadened to include an important emerging economy, Brazil. In addition, the book now incorporates analysis of the burgeoning use of corporate law to protect the interests of "external
constituencies" without any contractual relationship to a company, in an attempt to tackle broader social and economic problems.

The authors start from the premise that corporations (or companies) in all jurisdictions share the same key legal attributes: legal personality, limited liability, delegated management, transferable shares, and investor ownership. Businesses using the corporate form give rise to three basic types of agency problems: those between managers and shareholders as a class; controlling shareholders and minority shareholders; and shareholders as a class and other corporate constituencies, such as
corporate creditors and employees. After identifying the common set of legal strategies used to address these agency problems and discussing their interaction with enforcement institutions, The Anatomy of Corporate Law illustrates how a number of core jurisdictions around the world deploy such strategies.
In so doing, the book highlights the many commonalities across jurisdictions and reflects on the reasons why they may differ on specific issues.

The analysis covers the basic governance structure of the corporation, including the powers of the board of directors and the shareholder meeting, both when management and when a dominant shareholder is in control. It then analyses the role of corporate law in shaping labor relationships, protection of external stakeholders, relationships with creditors, related-party transactions, fundamental corporate actions such as mergers and charter amendments, takeovers, and the regulation of capital
markets.

The Anatomy of Corporate Law has established itself as the leading book in the field of comparative corporate law. Across the world, students and scholars at various stages in their careers, from undergraduate law students to well-established authorities in the field, routinely consult this book as a starting point for their inquiries.

John Armour is Hogan Lovells Professor of Law and Finance at the University of Oxford and a Fellow of the European Corporate Governance Institute. He was previously a member of the Faculty of Law and the interdisciplinary Centre for Business Research at the University of Cambridge. He has held visiting posts at various institutions including the University of Chicago, Columbia Law School, the University of Frankfurt, the Max Planck Institute for Comparative Private Law, Hamburg, and the
University of Pennsylvania Law School. His main research interests lie in company law, corporate insolvency law, and financial regulation, in which areas he has published widely. He has been involved in policy projects commissioned by the UK's Department of Trade and Industry, Financial Services Authority
and Insolvency Service, the Commonwealth Secretariat, and the World Bank. He currently serves as a member of the European Commission's Informal Company Law Expert Group.

Paul Davies is a Senior Research Fellow in the Centre for Commercial Law at Harris Manchester College, University of Oxford. He was the Allen & Overy Professor of Corporate Law, University of Oxford, between 2009 and 2014. Between 1998 and 2009 he was the Cassel Professor of Commercial Law at the London School of Economics and Political Science. He was a member of the Steering Group for the Company Law Review which preceded the enactment of the Companies Act 2006, and has been involved
recently in policy-related work for the UK Treasury. His most recent works include the 10th edition of Gower and Davies, Principles of Modern Company Law (Sweet & Maxwell, 2016, with Sarah Worthington); and Introduction to Company Law (OUP, 2nd ed., 2010). He is a Fellow of the European Corporate Governance
Institute, a Fellow of the British Academy, and an honorary Queen's Counsel.

Luca Enriques is the Allen & Overy Professor of Corporate Law in the Faculty of Law, University of Oxford, and a European Corporate Governance Institute Research Fellow. He has been Professor of Business Law at the University of Bologna and LUISS-Rome. Between 2007 and 2012, he served as a Commissioner at Consob, the Italian Securities and Exchange Commission. He has been Visiting Professor at various institutions, including Harvard Law School, Instituto de Impresa (Madrid), and IDC
Herzliya. He has published several books and articles on topics relating to corporate law, corporate governance, and financial regulation. He is a coauthor, together with John Armour, Paul Davies, and others, of Principles of Financial Regulation (OUP, 2016).

Henry Hansmann is the Oscar M. Ruebhausen Professor of Law at the Yale Law School. His scholarship has focused principally on the law and economics of organizational ownership and structure, and has dealt with all types of legal entities, both profit-seeking and nonprofit, private and public. He has been Professor or Visiting Professor at Harvard University, New York University, and the University of Pennsylvania Law Schools. Recent publications include Legal Entities as Transferable Bundles of
Contracts (with Kenneth Ayotte), 111 Michigan Law Review 715 (2013), and External and Internal Asset Partitioning: Corporations and Their Subsidiaries (with Richard Squire), in Jeffrey Gordon and Georg Ringe (eds.), The Oxford Handbook of Corporate Law and Governance (OUP, forthcoming). He is a
Fellow of the American Academy of Arts and Sciences and the European Corporate Governance Institute.

Gerard Hertig is Professor of Law at ETH Zurich and a European Corporate Governance Institute research fellow. He was previously Professor of Administrative Law and Director of the Centre d'Études Juridiques Européennes at the University of Geneva Law School (1987-1995). He has been a visiting professor at leading law schools in Asia, Europe, and the United States, and practiced law as a member of the Geneva bar. Recent publications include Decision-Making During the Crisis: Why Did
the Treasury Let Commercial Banks Fail? (with Ettore Croci and Eric Nowak), Journal of Empirical Finance (2016); Governance by Institutional Investors in a Stakeholder World, in The Oxford Handbook of Corporate Law and Governance (OUP, forthcoming); Shadow Resolutions as a No-No in a Sound Banking Union, with
Luca Enriques, in Financial Regulation: A Transatlantic Perspective (CUP, 2015).

Klaus Hopt was Director of the Max Planck Institute for Comparative and International Private Law in Hamburg, Germany. His main areas of specialization include commercial law, corporate law, and banking and securities regulation. He has been Professor of Law in Tübingen, Florence, Bern, and Munich, Visiting Professor at numerous universities in Europe, Japan, and the USA, including the University of Pennsylvania, the University of Chicago, NYU, Harvard, and Columbia, and was a judge of the
Court of Appeals, Stuttgart, Germany. He served as a member of the High Level Group of Experts mandated by the European Commission to recommend EU company and takeover law reforms. He is a Member of the German National Academy (Leopoldina). Recent publications include Comparative Corporate Governance
(CUP, 2013, with Andreas Fleckner (eds.)) and Corporate Boards in Law and Practice (OUP, 2013, with Paul Davies et al. (eds.)).

Mariana Pargendler is Professor of Law at FGV Law School in São Paulo (FGV Direito SP), where she directs the Center for Law, Economics, and Governance. She is also Global Associate Professor of Law at New York University School of Law and has been a Visiting Professor of Law at Stanford Law School. She is the author of numerous articles on corporate law and comparative corporate governance. Her main recent publications include The Evolution of Shareholder Voting Rights: Separation of
Ownership and Consumption (with Henry Hansmann), 123 Yale Law Journal 948 (2014), Politics in the Origins: The Making of Corporate Law in Nineteenth-Century Brazil, 60 American Journal of Comparative Law 805 (2013), and State Ownership and Corporate Governance, 80 Fordham Law Review 2917 (2012).

Wolf-Georg Ringe is Professor of International Commercial Law at Copenhagen Business School and Visiting Professor at the University of Oxford Faculty of Law. He has held visiting positions at various institutions in Europe and North America, including Columbia Law School and Vanderbilt University. He is the editor of the new Journal of Financial Regulation, which has been published by Oxford University Press since 2015. He has been involved in policy work with both the European Commission and
the European Parliament on issues of European Corporate Law. His current research interests are in the general areas of law and finance, comparative corporate governance, capital and financial Markets, insolvency law, and conflict of laws. Recent publications include The Deconstruction of Equity (OUP
2016) and The Oxford Handbook of Corporate Law and Governance (OUP, forthcoming, with Jeffrey Gordon (eds.)).

Edward Rock is Professor of Law at New York University Law School and director of NYU's Institute for Corporate Governance and Finance. He writes widely on corporate law, has been Visiting Professor at the Universities of Frankfurt am Main, Jerusalem, and Columbia, and has practiced law as a member of the Pennsylvania bar. Recent publications include Does Majority Voting Improve Board Accountability? (with Stephen Choi, Jill Fisch, and Marcel Kahan), University of Chicago Law Review
(forthcoming), Institutional Investors in Corporate Governance, in The Oxford Handbook of Corporate Law and Governance (OUP, forthcoming), and Symbolic Corporate Governance Politics (with Marcel Kahan), 94 Boston University Law Review 1997 (2014).