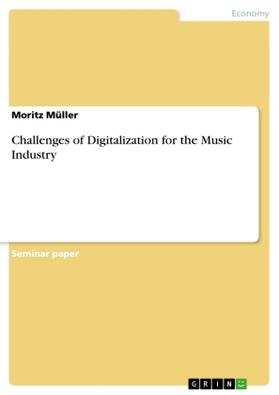 Müller Challenges of Digitalization for the Music Industry

Müller Challenges of Digitalization for the Music Industry

Seminar paper from the year 2013 in the subject Business economics - Offline Marketing and Online Marketing, grade: 1,3, University of Münster, course: Digital Media Marketing Seminar, language: English, abstract: This seminar paper analyses how the digitalization has changed the general set-up of the music industry. By analyzing studies and data, the paper illustrates several challenges that influenced record sales. Considering the different type of players in the music industry - record labels, online and physical retailers, and artists - this paper will only discuss the challenges and effects of the digitalization on the major record labels. The challenges of digitalization for artists will not be covered in this paper; digital music actually enhances the chance of being discovered and for reaching a larger audience (Ankeny 2012). In this sense, the digitalization is an opportunity, rather than a challenge for artists. This also applies for online retailers such as iTunes and Amazon. Since digital music does not require physical storage, online retailers can offer music at almost zero costs. Thus, online retailers benefit from the digitalization of music. Physical retailers presumably lose revenue because of the digitalization of music. However, their situation will not be discussed further, in this paper. The major record labels are highly vertically integrated (Neff and Blömer 2003, p. 104). Besides managing artists, the recording companies are also in charge of the publishing and copyrights of music. Additionally, they have enormous production resources and strong distribution networks. This gives the major record labels a significant competitive advantage. However, this advantage was partly ruined by the digitalization. In this paper, digitalization of the music industry is limited to the impact of MP3s on the industry. The introduction of the CD as the first phase of digitalization is not further discussed. Chapter two deals with the challenge of piracy for the record companies. In chapter three, the increased competition as a challenge will be described. The change of the product music is discussed in chapter four. Chapter five presents the changing con-sumer behavior, as the final challenge for the major record labels. Every chapter is concluded by presenting the reactions of the record labels to the respective chal-lenges. The paper is rounded off by a conclusion, in which the main points are sum-marized and a discussion of future strategies for the record labels.