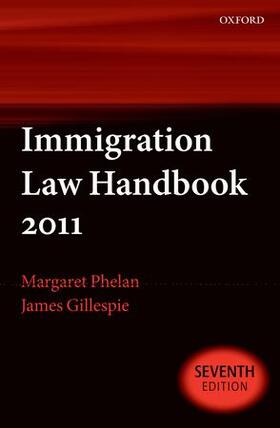 Now in its seventh edition, the Immigration Law Handbook continues to bring together all the key materials relavant to Immigration and Asylum Law in one volume, providing an essential reference tool for those working in the area.

This new edition addresses key changes that have arisen from the implementation of the Borders, Citizenship and Immigration Act 2009 as well as substantial changes to the Immigration Rules by way of the latest phase of the "Points-Based System". It also covers the UN Convention on Rights of the Child, which has been ratified in the UK since the last edition, as well as new secondary legislation implementing both the 2009 Act and previous legislation, including new appeals procedures. This
coverage of recent new legislation sits usefully alongside existing important legislation to maintain the strengths of the handbook as a reference tool whilst bringing the reader up-to-date with all new developments.

The Immigration Law Handbook has established itself as the standard in the field and has become an invaluable resource for immigration practitioners including Asylum and Immigration Tribunal judges and barristers, and solicitors and caseworkers working in immigration, asylum, and human rights law.

Update to Preface of 7th edition

On page ix it is stated that the contents of the book reflects the law as at 1 September 2010. Unfortunately the amendments submitted on that date were not able to be included in the text, and the correct date is 7 June 2010. This is of particular importance when reading the Immigration Rules, as the July 2010 changes have not been included.

Apologies to anyone inconvenienced by this.

Please cross out the date 1 September 2010 at ix, and substitute 7 June.