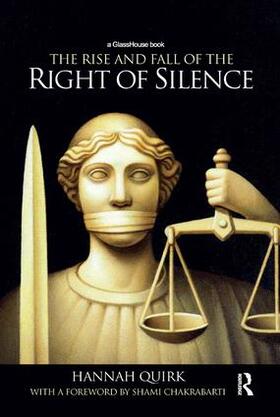 Quirk The Rise and Fall of the Right of Silence

Quirk The Rise and Fall of the Right of Silence

Within an international context in which the right to silence has long been regarded as sacrosanct, this book provides the first comprehensive, empirically-based analysis of the effects of curtailing the right to silence. The right to silence has served as the practical expression of the principles that an individual was to be considered innocent until proven guilty, and that it was for the prosecution to establish guilt. In 1791, the Fifth Amendment to the US Constitution proclaimed that none ‘shall be compelled in any criminal case to be a witness against himself’. In more recent times, the privilege against self-incrimination has been a founding principle for the International Criminal Court, the new South African constitution and the ad hoc International Criminal Tribunals for Rwanda and the former Yugoslavia. Despite this pedigree, over the past 30 years when governments have felt under pressure to combat crime or terrorism, the right to silence has been reconsidered (as in Australia), curtailed (in most of the United Kingdom) or circumvented (by the creation of the military tribunals to try the Guantánamo detainees). The analysis here focuses upon the effects of the Criminal Justice and Public Order Act 1994 in England and Wales. There, curtailing the right to silence was advocated in terms of ‘common sense’ policy-making and was achieved by an eclectic borrowing of concepts and policies from other jurisdictions. The implications of curtailing this right are here explored in detail with reference to England, Wales and Northern Ireland, but within a comparative context that examines how different ‘types’ of legal systems regard the right to silence and the effects of constitutional protection.

1. The Right of Silence- A Benchmark of Justice? 2. The Right of Silence -A Crime Control Target? 3. Police Custody, Cop Culture and the Caution 4. A ‘Fundamental Dilemma’: The Undermining of Legal Representation at the Police Station 5. Silence in Court Conclusion - The Transformed Landscape of the Criminal Trial