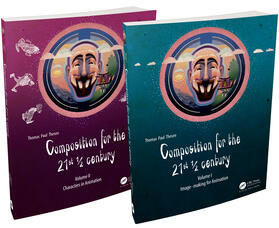 This book is about composition and its application in animation, illustration, games and film. It covers all various aspects of design and explains in detail the use of the specific aspect and provides examples of its impact. Focus is on the ability of each aspect to tell a story and how it affects story. Additionally case studies are included that explain the successful use of those aspects in film and animation. The book is geared to students and professionals, however tries to be as simple as possible in the presentation of each aspect, but also complex in its case studies. The book’s goal is to see composition as a technical part of image and film and as an artistic tool.

Key Features
Teaches the complexity of composition in image making.
Closes the gap between praxis and theory in animation.
Explains why certain images have a high quality and how to use the "whoy" in one's personal artistic work on a daily basis.
Key term definitions found throughout the chapters.
Case studies and video clips help the reader understand the process as they progress through the book.

What is composition and design. Images and their content. Storytelling in images. The purpose of images: illustrations, comics, development art. The look of a film reversed. Deconstructing the animated short-film Duck Amuck. Objects and information. The frame itself. Magnetism of the frame. Creating different frame-shapes. The rectangular frame and its forces. Open and closed frame. On-screen and off-screen space. Case-study: on and off-screen space in Koji Yamamura’s Atama Yama (2002). Aspect Ratios. Aspects of Design.

Thesen, Thomas Paul
Thomas Paul Thesen has spent six years in illustration at the University for Applied Sciences in Hamburg and then got his Master of Fine Art in Experimental Animation at CalArts in California. During his studies he was approached by Pixar Animation Studios to do inspirational character development on their feature film Ratatouille. After getting his MFA from CalArts he started to work as a character-animator for Dreamworks Animation and worked on the feature Shrek 2. He always wanted to go into visual development and switched departments to work on features like Bee-Movie or Puss-in-Boots. Since then he have been focusing on visual development, character design and illustration in his professional and freelance work. For eight years now he has been teaching animation for universities like SCAD, NYU Tisch, Hongik University or Hallam University.